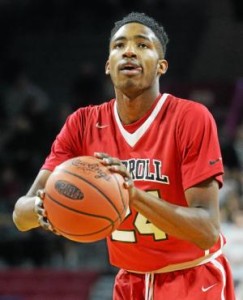 Jones, the 2014-15 Daily Times Player of the Year, also earned the Pennsylvania High School Player of the Year honor in Class AAA. The Associated Press All-State teams, for boys and girls, were unveiled Thursday.

The 6-7 senior forward, who is bound for UNLV, capped his run of five straight double-doubles in PIAA Class AAA tournament play by with a 30-point, 18-rebound performance in a loss to Neumann-Goretti in the state final.

Jones averaged 19.3 points per game for the Patriots and finished as the school’s all-time leading scorer.

The Haverford School had a pair of representatives on the all-state teams in Class AAAA. Levan “Shawn’ Alston was named to the first team and Lamar Stevens earned second-team recognition.