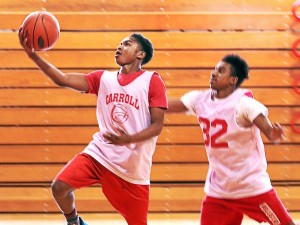 Archbishop Carroll guard Josh Sharkey, left, takes the ball to the basket during a practice this week. Sharkey knows the Patriots are the underdogs going into the PIAA Class AAA championship game Friday against Neumann-Goretti, a team they have beaten just once in their last 31 meetings. (Robert J Gurecki)

Off the top of his head, Paul Romanczuk’s estimate of Archbishop Carroll’s history with Neumann-Goretti is pretty accurate.

The win column, he says with a chuckle, is easy to tabulate. It’s one.

The number on the other side of the ledger, since the Philadelphia Catholic League joined the PIAA for the 2008-09 season, is much vaster: 16. (Romanczuk, an accountant by trade, was only off by one with his guess of 17.)

Since the last time Carroll beat Neumann-Goretti, the Patriots boys basketball team has incurred 12 losses; before that win in 2009, dating back to 2001 and the pre-PIAA era, it was 18 straight setbacks at the hands of a program that has become the gold standard in Pennsylvania.

But there’s a glint of hope for Romanczuk among what should be dour numbers: The last time Carrol beat Neumann-Goretti back in 2009, it led the Patriots to a state title. That proposition will be repeated Friday, more directly, in the PIAA Class AAA Championship game.

For the sixth time in seven seasons, a Catholic League squad will be crowned the AAA champ at Hershey’s GIANT Center (8 p.m. tipoff). In 2009, that was Carroll, the road going through Neumann-Goretti with a 70-65 quarterfinal win at Archbishop Ryan that still stands as the Patriots only win in the last 31 meetings.

Four of those titles have headed to South Philadelphia with the Saints, while the seventh was claimed by District 12’s Imhotep Charter in the 2013 final over Carroll.