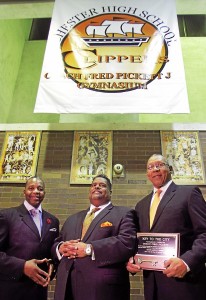 Under the banner that announces that the Chester High gym is now the Fred J. Pickett Jr. Memorial Gym stand, from left, state Rep. Thaddeus Kirkland, D-159, of Chester; Chester Upland District Superintendent Greg Shannon and Chester Mayor John Linder. The memory of the longtime Chester coach who died in October was honored in a ceremony to rename the gym prior to the Clippers’ game against Penn Wood. (Robert J Gurecki)

In the locker room at the Bryce Jordan Center, moments after Chester captured the 2008 PIAA Class AAAA title, few people were as shocked as Larry Yarbray at the words coming out of Fred Pickett Jr.’s mouth.

“‘ This ain’t the time for that, Fred,” Yarbray, then a top assistant, recalled telling the Clippers head man of 13 years, who’d just sewn up his third state title.

Pickett’s response was simple, as plain as many of the declarations that powered him to 331 wins and transformed the lives of so many youths: “Coach, it’s your time.’

Tuesday night was Pickett’s time, with the gym at Chester High that witnessed the 11 Del Val League title and 13 state tournament appearances under his stewardship formally dedicated in the late coach’s honor.

Dignitaries from the city of Chester, including Mayor John Linder and Chester-Upland School District Superintendent Gregory Shannon, oversaw the event, which preceded Chester’s 65-45 win over Penn Wood in the teams’ Del Val opener.

Linder presented Pickett’s widow, Wanda, with a key to the city, while he and Shannon gifted the family a framed black jersey with the number “331′ and the words “Coach Pickett The Pride of Chester’ emblazoned in orange to commemorate the accomplishments of the coach who died at age 60 last October.

On hand among a bevy of family members were Pickett’s sons, Fred III and Shawn. Chester High grads in 1997 and 2000, respectively, they saw both sides of Pickett, as a coach and a father.

← Clover pours in 20, but O’Hara falls to the Prep
Stevens carries Haverford School past GA →