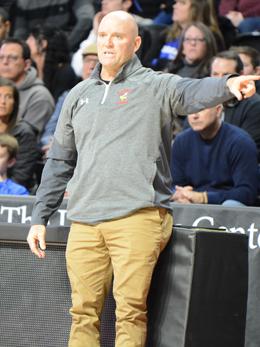 Tom Durant (above) and West Chester East, like the rest of the area’s high school programs, are trying to figure out their situations for 2020-21. (Photo: Josh Verlin/CoBL)

Tom Durant has had plenty of time to wait — nearly 300 days, in fact, since his West Chester East team last played a game.

It was a finish to the season that nobody truly could’ve anticipated.

Sure, the uncertainty of COVID had started to creep in, but the Vikings had their minds on a Class 5A state title after comfortably taking home a District 1 crown just a few weeks earlier.

The final moment of their campaign indeed was a celebratory one — just that of a Tym Richardson buzzer-beater in the second round. That March 10 night marked their final game before the rest of the state tournament, along with East’s season, was ultimately abandoned.