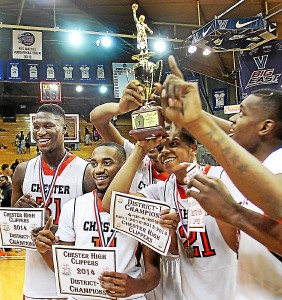 Some of Chester’s players are showing off the District 1 championship trophy at Villanova. Times Staff/ROBERT J. GURECKI.

The four fingers held aloft by the Chester players and coaching staff Friday night at Villanova University had a clear meaning.

They weren’t pointing skyward for the fourth-quarter domination the Clippers put on display Friday. They weren’t for the measly four points Chester stifled Pennsbury into over the game’s final eight minutes.

They were for the fourth straight District One titles the Clippers booked Friday, courtesy of a come-from-behind 52-49 win over Pennsbury in the Class AAAA championship game.

As the medals were placed around the necks of the Chester squad, you’d be hard-pressed to find a wider smile than Tyrell Sturdivant’s.