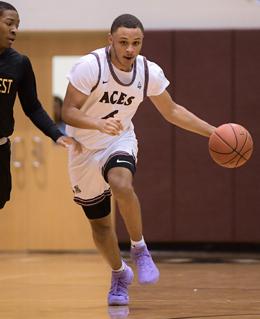 In the middle of the fourth quarter, with his team well on its way to an 11th straight victory, Gregg Downer told his whole team to come in close.

They expected to do this.

There would be no celebrating — they’d finish out the last few minutes, shake hands and head back to the locker room.

But if he was being completely honest, even Downer didn’t think it would go quite like this.

“That was probably our best half,” the longtime coach said afterward. “37-13 is not what you expect against a [high]-caliber opponent like Penncrest. But we were clicking on all cylinders.”

Certainly, that would be one way to describe Lower Merion’s 64-40 rout of the Lions Tuesday night in a clash between two of the Central League’s top teams. What many expected to be a tight-fought battle for 32 minutes quickly became a rout, and even with a young team, it’s clear that the Aces are right up with the area’s best right now.