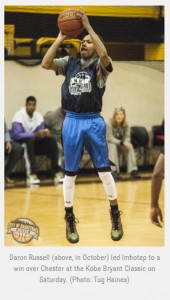 By Justin Allen Daron Russell may be small in stature, listed at just 5-foot-10, but the sophomore guard is taking his game to new heights. Behind a 21 point performance from its rising star, Imhotep Charter was able to defeat Chester 69-54 during Saturday’s Scholastic Play-By-Play Kobe Bryant Classic at Lower Merion High School. For his efforts, Russell was named MVP of the winning team. “I feel like I’m getting to be a little more confident each game,” Russell said. He and his teammates had their confidence on display throughout the entire game, as they led wire to wire. In the early going, it was Russell’s backcourt mate Khalief Tinley who got the Panthers off and running. Tinley scored 13 points on the evening, nine of which came during the first quarter.