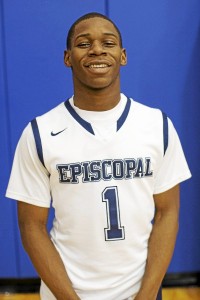 A senior guard, Jolaoso is once again displaying all-around excellence for the Churchmen, averaging 14.4 ppg, 6.4 apg and 4.5 rpg this season (as of Jan. 19). He scored 28 points in EA’s recent 78-75 overtime win against Malvern Prep. Last winter, Jolaoso was a first team All-Inter-Ac and All-Main Line basketball pick, averaging 14.5 points per game and leading the Churchmen in assists as well. EA head coach Craig Conlin calls him, “pound for pound, one of the toughest players in the area.’

Main Line Media News: You had a great performance in the 78-75 overtime win against Malvern Prep, with 28 points and a key assist on an inbounds pass to Matt Woods to win the game. What, to you, was the key play in the game — can you describe how the play developed and your role in it?

Mike Jolaoso: A key play in the game would be Malvern’s last possession in the overtime period. They had called a timeout previous to their possession setting up their last play. One of our role players, Kyle Sacchetta, was in the game for injured Conner Delaney. I had a feeling coming out of that timeout that with Kyle being young they were going to isolate him on defense for their last shot. Walking onto the floor, after the timeout, I went straight to Kyle telling him to be careful and not to foul. Malvern did indeed try to isolate Kyle, but he played great defense, forcing a tough shot for one of their players causing him to miss. That [allowed] us to take the final shot of the game, which Matt Woods, who had been struggling [with his shots] all game, was able to convert when it mattered most.