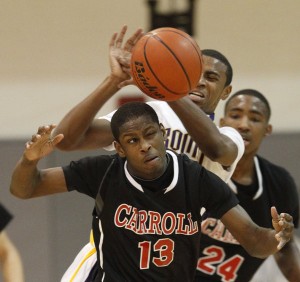 Manny Taylor is a 6-6, 250-pound forward for Roman Catholic. He was also a tight end/defensive lineman on the Cahillites’ football team.

So, it may have come as a surprise when the big fella stepped out and buried a few jumpers yesterday at Philadelphia University’s Gallagher Center against Catholic League foe Archbishop Carroll.

“It does surprise people,” he said. “I know it surprised [Carroll] because they were telling their big guys to back off me. It came as a huge surprise to them.”