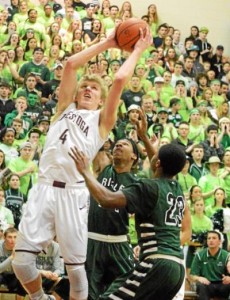 Ridley’s Ameer Staggs, right, does his best to defend Conestoga’s Andrew Diehl Friday night. The Green Raiders held on to win, 36-34, despite a controversial finish to their District One Class AAAA quarterfinal game. (Pete Bannan)

It’s going to take a fifth game, possibly in the state tournament, for Ridley and Conestoga to settle their score.

Right now the better team is the Green Raiders, who Friday night survived a controversial finish to defeat the Pioneers, 36-34, in the quarterfinal round of the Class AAAA District One basketball tournament.

The ninth-seeded Green Raiders (22-5) take on Plymouth Whitemarsh in the semifinals Wednesday night at Temple University.

The top-seeded Pioneers (22-4) get Lower Merion in the consolation round.

Both games determine seeding in the state tourney.

Though the season series between Ridley and Conestoga is even, the Green Raiders have prevailed in the last two games, including the Central League title game. They controlled the first half of the quarterfinal and were up to the task of rallying down the homestretch to pull it off.

“Seeding doesn’t matter,’ Brett Foster, who scored nine points for the Green Raiders said. “If we play hard and we play our game we’ve got a good chance of winning.’ The Pioneers did not go quietly. They made a case that the quarterfinal should have gone to overtime.

With the game tied and time running out there was a furious scrum beneath the Pioneers’ goal. After a couple of misses Daniel Vila tapped the ball in. The horn was inaudible as the capacity crowd rocking the arena was incredibly deafening.