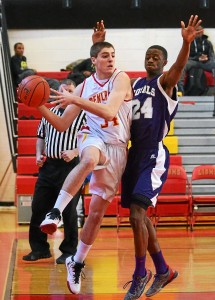 When Upper Darby looked for someone to step up in the fourth quarter, Torey Green obliged.

When it was Penncrest’s turn to have someone take over in overtime, the Lions looked to Rahmi Halaby. And the forward made all the difference.

Halaby scored six of his game-high 17 points in the extra frame, vaulting the Lions to a 52-46 win over the Royals in a crucial Central League contest Thursday afternoon.

Halaby was held without a field goal in the second half after eight first-half points. But that didn’t stop him from nailing a jumper on the Lions’ first possession of overtime. He followed with two free throws, then a lay-in high off the glass as the Lions (12-5, 9-2) scored the first six points of the extra session.

However involved Halaby may have been in the Lions’ offense in the second half, he’s used to being just another option on a team that has several. When it was his turn to be the focal point in overtime, he was ready to answer the call.