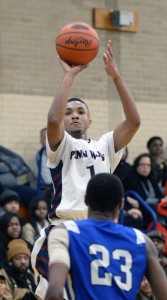 Penn Wood brings more to the table than just Malik Jackson’s shooting ability, but the battle from beyond the arc will be a big part of their game with Penncrest Friday. (Times Staff/TOM KELLY IV)

Few teams in the District One field have the kind of momentum that Penn Wood possesses, winners of seven straight games. The Del Val co-champions (17-5) have just two losses to Pennsylvania opposition since the turn of the New Year, and as the No. 5 seed, the Patriots have the look of potential title contenders in District One.

That road starts by leveraging their homecourt advantage (which they would retain for at least the second-round, states-qualification round as well) in the Shoebox with a visit from No. 28 Penncrest (13-9) Tuesday night.

The game presents a clash of styles, not so much in height or scheme but in tempo. The Patriots average 63.9 points per game and are most at home when they open things up in transition and get after teams on both ends of the court. (Any team with excellent guards like Malik Jackson and Addison Scott would prosper when creating a little havoc.) Only twice this season have the Patriots scored fewer than the 49.1 points that Penncrest averages per game, and both of those games were against Chester.

The matchup in the backcourt is where the Patriots have a decided edge, which is an issue for a Penncrest team that is driven by its guards. Penncrest is going to have to get guards Mike Doyle and Nolan Carroll hitting shots early and often, and the Lions will have to play through their frontcourt players, AJ Taylor and Chandler Henry, who have a marked height advantage over the likes of Calvin Melton, Kwabriem Jenkins, Jordan Johnson and Pernell Ghee. A game where Doyle is the only credible offensive threat for Penncrest won’t remain competitive long, and it behooves them to keep the game in the 50s.