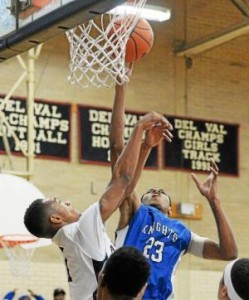 Academy Park’s Lashon Mapp, right, here dropping in a layup over Penn Wood’s Malik Jackson, has the kind of shot-blocking skills that enable the Knights to gamble on defense with the knowledge that Mapp is capable of erasing any mistakes. (Tom Kelly IV)

He worried that the Knights’ only low-post player was done for the season, the shoulder injury he sustained going up for a rebound in the first quarter against Episcopal Academy appearing at first glance to require surgery or more rest than a high school season would allow. Once the Knights concluded their loss to the Churchmen, their first setback of the season, Brydges was considering contingencies.

And then, two days later, when the Knights took on Church Farm School at the Steve Jeunger Tournament at Haverford, there was Mapp, in the middle, grabbing rebounds and disrupting opponents’ offenses as always, the only noticeable difference a heavy tape job on his left shoulder.

To Mapp, playing on was hardly a question.

“There was a thought (about missing time), but I know that I’m a big part of this team and I didn’t want to let any of my teammates down,’ Mapp said Tuesday after a scrimmage against Penncrest.

Mapp’s willingness to play through pain has been vital for Academy Park (16-6). He’ll be instrumental in the Knights’ attempt to get past Oxford in the first round of the District One Class AAAA tournament Friday night.

The 2.0 points per game that Mapp has averaged this season isn’t indicative of his value. He’s the lynchpin to the Knights’ pressing defense, the last line of defense near the hoop. Standing 6-4, he’s hardly a big man by traditional standards, but he’s the tallest player in AP’s guard-heavy attack, and his lanky build means his reach is longer than his height would indicate. As Brydges says, Mapp allows his team to play “92 feet for 32 minutes.’