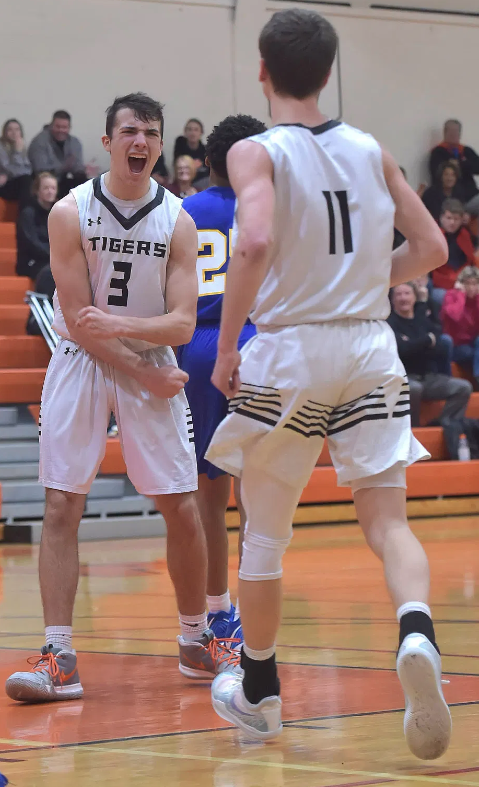 Marple Newtown’s Joey Paoletti, left, celebrates with teammate Mike Tansey after sinking a basket and drawing a foul to put the Tigers ahead for the first time in the fourth quarter against Springfield. The Tigers won, 47-43. (Pete Bannan/MediaNews Group)

Joey Paoletti summed it up pretty succinctly Tuesday night. His Marple Newtown team trailed by nine at halftime against winless Springfield. And the culprit, from a team perspective, was easy to spot.

“We had four shots inside the paint in the first half,” the junior guard said bluntly. “We knew we needed to drive the ball, so we tried to get inside and tried to get some quicker buckets.”

Paoletti summarized it so well because he was the one who had executed it just as tidily.

Paoletti scored all 11 of his points in the second half, waking the Tigers from a barren first half to rally past Springfield, 47-43, in a taut Central League affair.

Against the 3-2 zone deployed by the Cougars, Marple Newtown was lulled out of any offensive rhythm. At halftime, when they trailed 26-17, they had just one two-point basket — a putback of a missed 3-pointer — and one empty trip to the free-throw line. A 5-for-14 showing from the 3-point line was clearly not enough.

Enter Paoletti, a guard not afraid to tough it out in the post. It took him a while to feel out the gaps in the zone and find the donut hole in the middle. It took no time to assert the will to make his presence in there known.