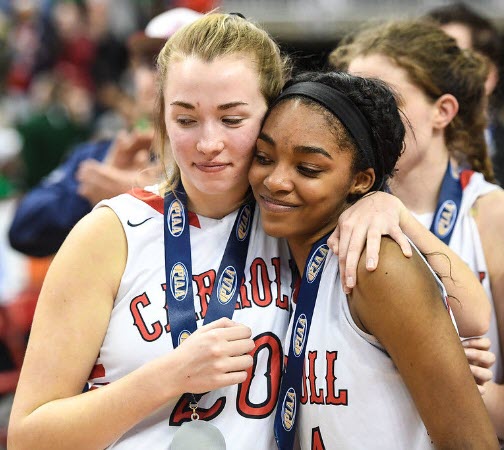 The Jaguars, along with the Archbishop Carroll girls and Bonner & Prendergast boys took Delco basketball fans on a thrilling post-season ride. MARK PALCZEWSKI — FOR MEDIANEWS GROUP

Somewhere between the horses and buggies dotting Rte. 30 and the Giant Center, where the Garnet Valley girls were playing for a state title, it occurred to us what a fascinating basketball season it was for Delaware County teams.

Runners-up, all, but that doesn’t diminish their journeys or those of the other Delco teams leaving us with poignant memories of hard work, relentless play and sheer emotion.

• With all due respect to Chester High and its prolific postseason history, it was impossible to ignore what a 5-foot-6 guard did to them in the Class 6A state quarterfinals.

Coatesville guard Jhamir Brickus dropped 52 points on the Clippers from almost every conceivable angle. No one, not even Lower Merion’s Kobe Bryant, scored so many on the Clippers in the postseason.

After the game, coach Keith Taylor and the Clippers made no excuses for the loss while Brickus disappeared into the crowd. Hours later the scoring machine appeared in a video interview aired on Twitter that since has been deleted. The following week Coatesville was eliminated in the semis by eventual state champion Kennedy Catholic.

Taylor promised that Chester High would be back. He’s not the kind of man to break a promise.