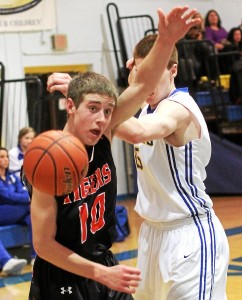 Marple Newtown was eight minutes away from a lost week Friday.

After hanging tough but not being able to finish against Ridley last Saturday — a theme the Tigers have grown tired of the last couple of years — and a midweek blowout at the hands of Lower Merion, many a team would’ve gotten an early start to their weekend.

Even Friday night, as Springfield fired home six of its first nine 3-point attempts, led by nine at half, led by as many 14 in the second half, Marple could’ve packed it in at any time.

That’s not Brian Shane’s team, though. And the team that showed up in the second half, the one that surmounted the deficits to grind out an improbable 60-55 win, that’s the team Shane has been waiting for all season to get its reward.