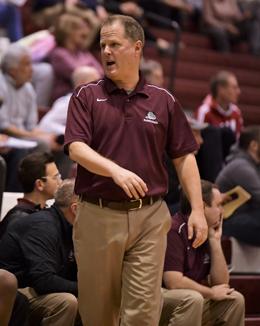 Gregg Downer knew the significance of Tuesday night’s game. Yes, it was a chance for his Aces to lock up the No. 2 seed and a first-round bye in the Central League playoffs.

But it was also Downer’s first opportunity to get win No. 600. He just didn’t tell his players.

And though it took the entire 40 minutes, Lower Merion eked out a 41-39 victory on its home floor, holding off a late-charging Conestoga squad and overcoming a miserable second half of offense. Senior Eli Rothman stepped up with 16 points, stepping into the starting lineup and playing all 32 minutes as he shouldered the brunt of the Aces’ scoring.

“It’s great to be a part of the team that got him that 600th win,” senior James Simples said. “I just want to make Coach happy — he works hard, we work hard, and it makes us happy when we get the results.”