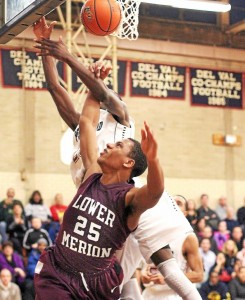 Justin McFadden was feeling a bit under the weather at halftime Tuesday.

By the time he was done with the third quarter, it was Penn Wood left feeling sick to its stomach.

The Lower Merion senior scored a game-high 24 points, including three 3-pointers early in the third quarter to key an 11-0 run as the No. 9 Aces blew open a tight game in a 58-43 win in the second round of the District One Class AAAA tournament.

The flurry of punches from the Aces out of halftime was enough to stagger Penn Wood, who had cut the deficit to one point when Landen Jenkins hit an open triple to start the second. But McFadden answered by hitting from deep on consecutive possessions, then after the teams traded misses, he canned another triple off one of JaQuan Johnson’s seven assists to put the Aces up 12.

Webmaster’s note:  If you missed the game you can listen to the ENTIRE game on our Game Archive.  Just click on the link to the right and listen anytime you like, 24/7. Enjoy!