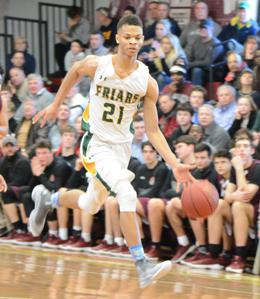 Save just enough time, Jack Concannon implored his Bonner-Prendergast squad, for one final shot. No more.

The Friars’ coach was upset at the way his team had handled the end of the first half in a big-time Catholic League matchup against St. Joseph’s Prep, when a too-early shot allowed the Hawks to get a pair of free-throws just before the teams hit the locker rooms.

In a tie game, with first place in the PCL on the line, Concannon wanted to make sure that the Prep didn’t have any chance to win it in regulation, as his Friars held possession with 22 seconds left in the fourth quarter. Isaiah Wong, the Friars’ star junior guard, was going to have the ball in his hands.

Wong did indeed let the clock drain down well beyond 10 seconds before making his move from the right wing. But his pull-up jumper from the top of the key hit the iron with a couple seconds still on the clock — just enough time for his teammate, Ajiri Johnson, to slam home the miss and deliver a 63-61 win for the Friars.