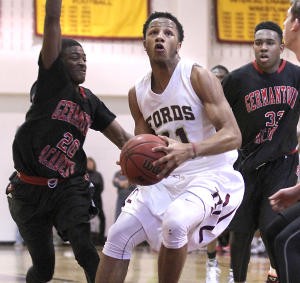 As they walked off their home court, confusion hung over the Haverford School basketball players like a storm cloud Tuesday afternoon.

They could scarcely grasp how they’d seen a 10-point fourth-quarter lead slip away, how they were dealt a 60-57 loss at the hands of Germantown Academy, how they’d seen their hopes of ending a 16-year Inter-Ac title drought mathematically dashed.

But at the center of that bewilderment, the central focus of the Fords’ dismay was one call that helped pivot the game in the Patriots’ favor and ratchet up the ire of the Fords.

With 2:22 left and Haverford School up five, Lamar Stevens hit the deck on a hard foul under the basket. The Fords staff rushed out to check on him, leading to a volley of calls back and forth. After what Haverford School coach Henry Fairfax termed “a negotiation’ between he, the officiating crew and GA coach Jim Fenerty, the Fords were charged with a technical foul, giving the Patriots two shots, the ball and the momentum.

Two minutes later, when Devon Goodman stole an inbounds pass and finger-rolled in what turned out to be the game-winner, it was that technical call on which the Fords fixated.

“My assistant left the bench to check on an injured player — Lamar fell on his back earlier this season — his natural reaction as a person that cares about kids is to check on him and see if he’s OK,’ Fairfax said. “Originally it was assessed that (Stevens) had to come off. Didn’t know that you could have a discussion, a dialogue, a negotiation about how that is to play out. And all of a sudden, it’s a technical foul.’

(click on this link for the full story and video)