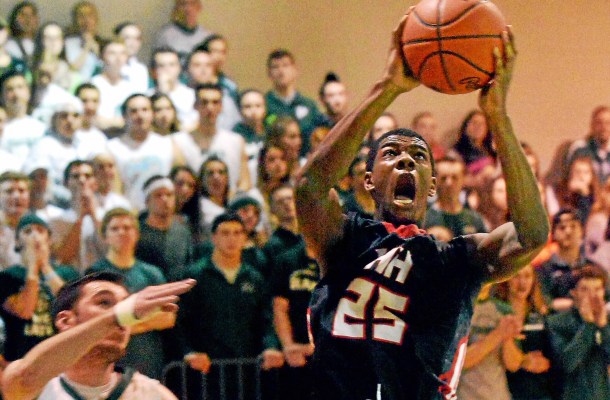 Hatboro-Horsham’s Jay Davis goes up for a shot past Pennridge’s Stephen Lowry during their game on Tuesday, Feb 23, 2016. (Bob Raines/Digital First Media)

After winning as many games as it lost in the regular season, the Hatboro-Horsham boys basketball team has found something that works in the District 1-AAAA Tournament.

“We always had the talent, but it was kind of like selfishness. Now, we’re starting to play as a team,” Hatters junior Clifton Moore said. “Everybody’s getting an even distribution of points and we’re trusting each other.”

And after Tuesday night, Hatboro-Horsham now finds itself in PIAA postseason play for the first time in 13 seasons after knocking off its third top-eight seeded team in districts, this time Suburban One League Continental Conference rival Pennridge.

Brian McEachern’s layup in the final minute of the 9th/10th place semifinal put the Hatters up one while a Davis steal led to two free throws for a three-point edge with 12.4 seconds left. The Rams had a look at a game-tying three, but the shot hit iron and visiting Hatboro-Horsham held on for a 46-43 victory.