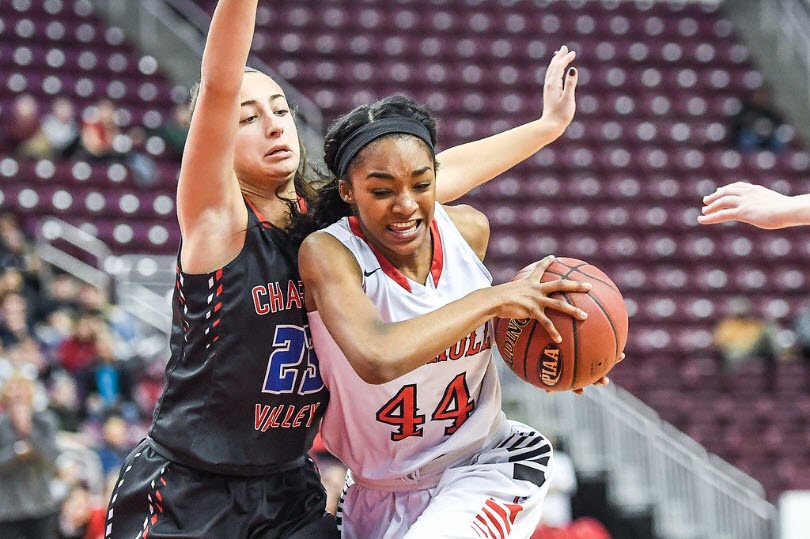 There was no hiding from the fact that Archbishop Carroll faced a substantial size disadvantage in Saturday’s PIAA Class 5A championship game against Chartiers Valley.

The Indians’ height and girth figured to give the Patriots fits.

Three Chartiers Valley starters — Mackenzie Wagner, Aislin Malcolm and Gabi Legister — stand 5-10 or taller. Legister, a 6-2 center, presented the biggest challenge. For good measure, they have a freshman, Perry Page, who is 5-11.

“Going in, we knew the big kid (Legister) would be trouble. We just didn’t have the length inside,” Carroll coach Renie Shields said. “We knew they were going to isolate down low. We were hoping we would make shots, to be honest. It’s really that simple. If only we can make some shots …”

The was no way for the Patriots to make enough to keep up.

Wagner scored 24 points on 8-for-10 shooting from the floor. Register added 13 points and seven rebounds and the District 7 champion Indians’ pound-it-inside approach paid dividends in a 53-40 victory over Carroll at Giant Center.

The Patriots, who were vying for their third PIAA championship, finished the the 2018-19 campaign with a 25-6 overall record. They won both the Catholic League and District 12 titles.