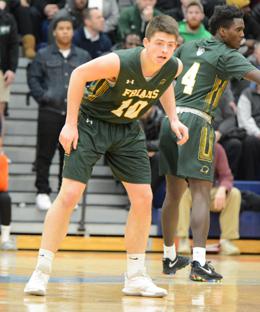 The son of former Bonner hooper Tom Eagan remembers watching Friars’ games from the time he was “five or six” years old, going to the Palestra to serve as water boy during Bonner’s 2008 Catholic League semifinals appearance. Ever since then, he’d dreamed of one day donning the Friars uniform, to follow in his dad’s footsteps and play for the school he’d been cheering for from his early years.

A dozen years later, Eagan’s finally getting his chance.

Now a senior at the school now called Bonner-Prendergast, Eagan has finally gotten his time on the varsity squad. And there’s no bigger regular-season game on the Friars’ schedule than their annual Delco date with Cardinal O’Hara, whose latest iteration came by Monday night. 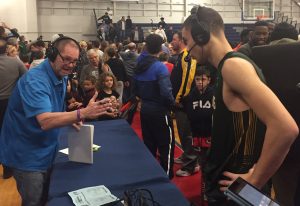 Malik Edwards being interviewed on our Game-of-the-Week broadcast by Dave Burman. Photo by Delcohoops.com

“I’ve been watching this game since I was five years old,” Eagan said, “always rooting for Bonner.”