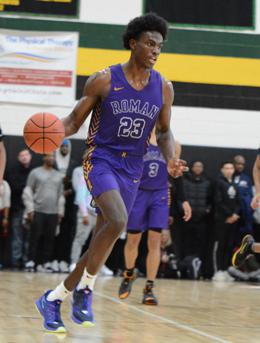 Jalen Duren (above) and Roman got over consecutive double-OT losses to survive a challenge from Carroll. (Photo: Josh Verlin/CoBL)

After two consecutive double overtime losses against PCL heavy hitters Archbishop Wood and Neumann-Goretti, and another overtime loss a few weeks ago against Bonner Prendergast, Roman Catholic managed to finish strong on Friday night against a talented Archbishop Carroll team.

Down four at the half, Roman outscored Carroll by 10 after the break, leaving the Community College of Philadelphia with a 76-70 win, and crucially advancing to 5-3 in conference play.

Cahillite big man Jalen Duren, viewed those earlier losses as  stepping stones to prepare an inexperienced Roman team –– with two freshmen and two sophomores in the starting five –– for the rigors of Catholic League play.

“I feel like those really helped us more than it hurt us because now we know what we’ve gotta do,” said Duren, one of the top high school big men in the country. “We know how to approach these teams, how to close games…you learn to stay calm. Our guards got to really become floor generals in the end, really control the pace and just do what we know best.”