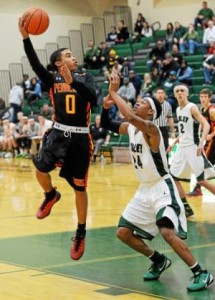 Penncrest’s Tyler Norwood, left, puts up a hook shot over Ridley’s Julian Wing (24) during a Jan. 17 game. Both teams are still alive for the second round of districts Tuesday night, with Norwood and the Lions taking on Lower Merion and Wing and the Green Raiders hosting Great Valley. (Tom Kelly IV)

Mike Doyle has been coaching long enough to see both sides of the coin for his team’s second-round matchup in the District One Class AAAA Tournament.

On the one hand, the preparation for Doyle’s No. 28 seed Penncrest team isn’t as vast against Lower Merion, a team Doyle reckons they’ve played five times in the last seven postseasons, including the second round of districts in 2013 and first round in 2012. But the flip side is that against the No. 12 Aces, Doyle will have to orchestrate a more nuanced approach, owing to the fact that both teams know each other so well.

“As far as my team and the Dawg Pound, we’re very excited to play a familiar opponent,’ Doyle said Monday. “Sometimes, being honest though, it’s better to play someone who doesn’t know you that well, who doesn’t know all your tricks. It’s all on the table with us, and we know what each other wants to do. It’s pretty straightforward.’

The Lions and Aces met just once this season, a 54-42 win at Lower Merion Dec. 9. The teams that convene Tuesday night at 7 at Lower Merion will be much different than those squads, but Doyle sees value in that game film. When all else fails, as it often can on the offensive end, such games provide glimpses of what the Aces are all about.

(click this link for the full Delco playoff run-downs)