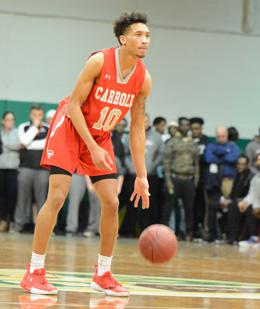 Justin Anderson (above) and Archbishop Carroll made the state playoffs for the 10th time in 10 years. (Photo: Josh Verlin/CoBL)

Before he let his team leave its locker room after Wednesday’s night‘s state play-in win against Mastery North, Archbishop Carroll head coach Paul Romanczuk had a question for his Patriots squad.

After the hint from their head coach, the Patriots nailed the correct response.

With its 67-61 overtime win against the Pumas, Carroll locked up its 10th straight PIAA appearance since the Philadelphia Catholic League schools were allowed to compete in the tournament for the first time during the 2008-09 season.