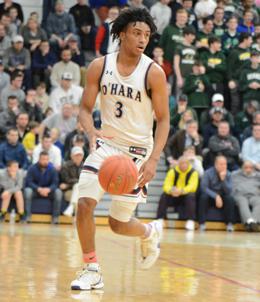 Tre Dinkins (above) had 19 points for O’Hara in the big road win. (Photo: Josh Verlin/CoBL)

Coaches who utilize a fast-paced offense are faced with a tricky balancing act. When you take a big lead, at what point, if at all, do you move away from your initial tactics and slow the game down?

That question was paramount in Cardinal O’Hara’s 61-54 upset road victory over Neumann-Goretti on Friday night.

After jumping out to an 16-point lead over NG in the first half, largely thanks to his team’s high-velocity offense, Lions coach Ryan Nemetz directed his team to start draining the clock. This led to neither team scoring a point from midway through the third quarter to the last seconds of the period.

Neumang guard Hysier Miller hit a floater to at the buzzer to end the scoring drought and cut O’Hara’s lead to 48-32. This seemed to kickstart Neumann-Goretti, who went on a 10-0 run to start the final quarter, dragging the crowd from being a nonfactor to uproariously willing their team to a comeback victory.