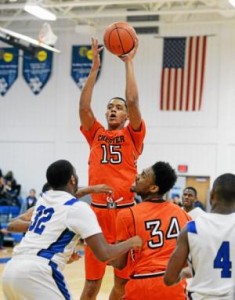 Chester’s Marquis Collins, shooting over the Academy Park defense in a game last week, has a chance to lead his Clippers to a share of the Del Val title Thursday against Glen Mills. (Tom Kelly IV)

A pair of league titles hang in the balance this week, and both have the opportunity to be settled head to head.

In the Del Val League, three teams have a claim to the championship. Last year’s champ, Penn Wood (7-2 in Del Val) can clinch their share of the league title with a win at home against Academy Park Thursday.

The Patriots could split the title with Chester (if it beats Glen Mills Thursday afternoon) or Glen Mills (if it beats Chester, then Chichester Friday in a makeup game). All three teams enter Thursday with two losses apiece.

The equation is much simpler in the Inter-Ac League: Entering the final game of the season, both Episcopal Academy and Germantown Academy hold 8-1 records. It’s a winner-take-all proposition at EA in a game that was snowed out two weeks ago.

While numerically simple, there’s plenty riding on the game from an emotional standpoint. EA coach Craig Conlin spent seven seasons as GA’s head baseball coach and 15 as a basketball assistant to Jim Fenerty, the Patriots coach and athletic director. Fenerty called Conlin “one of his best friends’ after Tuesday’s win over Haverford School, while Conlin counts Fenerty as one of his most influential mentors.

This is also a chance for Conlin to stamp his authority on the EA program. He’s in his fifth season and seeking the Churchmen’s first Inter-Ac title since 2005. That championship was the 13th total (10th outright) for his predecessor, the legendary Dan Dougherty.