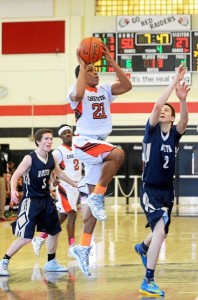 West Chester Rustin, a team that Chester already handled in the District One semifinal round a few weeks earlier, could have been another one of those pesky, guard-oriented teams that don’t go away, but the Clippers had an answer for everything the Golden Knights threw their way.

Not to say that they ever take any opponent lightly, but the Clippers sure played like a team on a mission against the Golden Knights. There was no more messing around.