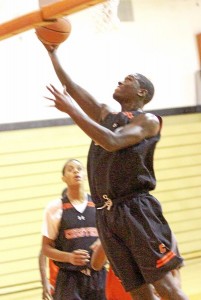 The faces have changed so much in the Clip Joint.

Sporting his usual ear-to-ear smile and a few drops of sweat on his forehead, Conrad Chambers knocked down free throw after free throw some 20 minutes before a recent practice. He’s changed numbers, too, sporting No. 11 after wearing No. 1 in his first season as a Clipper. The reasoning?

“No. 1 is a smaller jersey, so I had to get something bigger,’ said the senior combo guard, who looks noticeably bigger this season.

That’s the hat that Chambers has to wear as the team leader because, well, everybody else is gone. Nine seniors left after last season’s loss to Lower Merion in the PIAA Class AAAA state final and a tenth player ended up going to a prep school. The mainstays of that crew, from two-time Daily Times Player of the Year Rondae Hollis-Jefferson to All-Delco Richard Granberry, from Rashan DeJarnette to Darius Robinson, are playing all across the country, some at prep schools, some at junior colleges and some for the soon-to-be top-ranked team in the country.