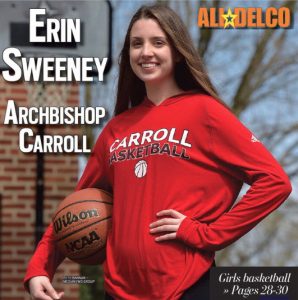 Archbishop Carroll’s Erin Sweeney battled injuries this season but still had the Patriots on a deep run in the PIAA Class 5A tournament when the plug was pulled on the season. (Pete Bannan/MediaNews Group)

Erin Sweeney wanted to be a softball player.

“When I was younger, softball was the sport that I really liked,” the Archbishop Carroll senior said. “I played basketball, but softball was my favorite sport.”

In the sixth grade, everything changed for Sweeney. That’s when she decided to try out for the Comets, one of the best travel basketball organizations in the country, which has developed more than 600 college players since the mid-1980s.

“I made Comets, and after that first year, that’s when I decided basketball was what I wanted to play,” Sweeney said. “From that point on, basketball became my main thing and it’s because of the Comets. That’s when I pretty much decided, basketball is what I’m going to focus on.”

The Havertown resident was a standout player at St. Bernadette’s before joining Carroll, where she was coached all four years by ones of her Comets coaches, Renie Shields.

A four-year starter, Sweeney led Carroll to the Catholic League championship in 2019. She eclipsed the 1,000-point mark as a junior and committed to Drexel University prior to her senior campaign.