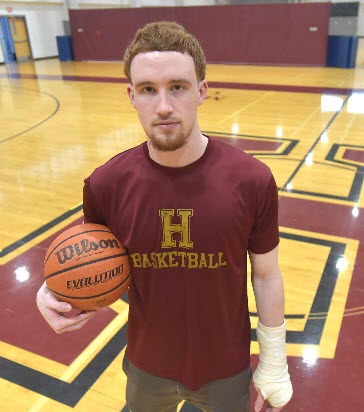 On each wrist, Christian Ray carries a reminder of Dec. 29. On his right wrist is a tattoo of the date, the birthday of his mother, Sharon. His left wrist sports the remnants of a game on that date — against Cherokee High School in a holiday tourney at Widener, when the Haverford School forward went up for a dunk and came down awkwardly on his arm.

He hoped the injury was merely a sprain, to be treated with rest and tight taping. Only after the season did Ray find out his wrist was broken, requiring surgery to insert a screw.

“I knew it hurt at first, and the next day I wasn’t able to dribble using the left hand, but I figured it was just a sprain,” he said last week. “It hurt, sometimes more than others, especially when I re-aggravated it. But I kind of just put tape around it because for the most part that worked throughout the year.”

It’s not easy to make Ray’s 2018-19 season seem any more impressive, but the injury does the trick. That Ray averaged 23.3 points, 11.1 rebounds and 3.5 assists per game, shooting 61 percent from the field and leading the Fords to a second straight Inter-Ac title, the PAISAA championship and a perfect 28-0 season … those numbers speak for themselves. But Ray did it with his wrist braced, for a team carrying a target on its back as the reigning Inter-Ac champs and the kind of unbeaten run that makes opponents salivate at the prospect of being the first to beat them.