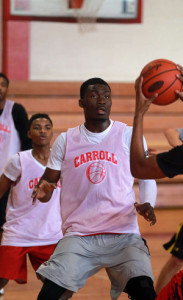 Even when his arrival isn’t heralded by the metallic click-clack of crutches, Ernest Aflakpui rarely succeeds in being inconspicuous.

With his knee still housed in a hefty, hinged knee brace nearly four months after surgery to repair a torn meniscus, the 6-9 center has had ample opportunity to recede into the background, to look ahead to his future with Temple and beyond the present that he can’t participate in at Archbishop Carroll.

But Sunday afternoon, there’s no place Aflakpui would rather be than at Carroll’s practice, sporting a red sweatshirt and somehow condensing his 240-pound frame into a courtside folding chair as the Patriots go through their motions. It’s what he’s done all season, a constant fixture on Carroll’s sideline in a campaign that for him ended after three games.

As the Patriots enter the second round of the PIAA Class AAA Tournament Tuesday against Steelton-Highspire (8 p.m., Reading’s Geigle Complex), Aflakpui will be on hand, doing whatever he can to chip in.

“I can’t be in there and play, so all I have to do is show up as much as I can and talk to the guys and lift them up, let them know that I’m here for them,’ Aflakpui said. “As much as I’d love to play and I can’t play, I’m still here.’

Of all the talent on a squad that boasts five likely Division I players, Aflakpui was the one piece coach Paul Romanczuk could least afford to lose. In his third year at the school, the Ghana native’s upside was so alluring as to attract Temple, among other Division I suitors.

← Sharkey gets Carroll off to a quick start
Without Hill, Delco Christian’s resilience has been remarkable →