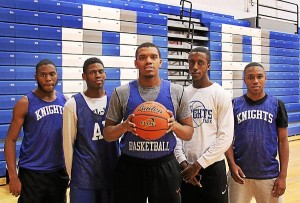 Academy Park’s regular starting five of, from left, Terran Hamm, Travis Smith, Cyrie Spencer, Kaleb Tallafero, and Jawan Collins have the Knights playing a vastly improved brand of basketball this season that has them headed for a spot in the District One playoffs. (Robert J Gurecki)

To a man, the core of the Academy Park basketball team struck the chords you’d expect from a team enjoying a resurgent season.

They discussed playing for each other and putting the team above the individual. They invoked buzzwords like togetherness and teamwork.

But even when interviewed separately, senior leaders Terran Hamm and Cyrie Spencer each chose the same anecdote to illustrate how that unity manifested itself on the team.

“Everybody is playing together. Everybody is not going off for themselves. Everybody works as a team,’ Hamm said. “Even when someone falls, everyone helps him up.’

“Everybody picks each other up, if there’s someone down on the floor,’ Spencer added. “There’s no ‘˜I’ in team. That’s why you see every night, there’s a different leading scorer. We’re all as one.’