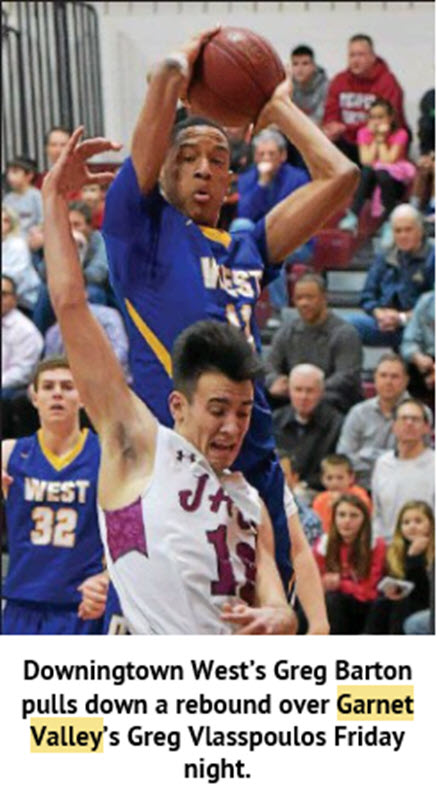 There wasn’t much Cade Brennan could do but observe from his seat on the bench. Gripping his water bottle, the Garnet Valley junior glanced at the scoreboard … over and over.

The clock was winding down on Garnet Valley’s season. Brennan wanted to be on the floor and, quite frankly, the Jaguars needed him out there if they had any chance at survival.

It wasn’t his fault, though. Brennan, the team’s leading rebounder in Friday’s district playoff opener, was pulled in favor of a lineup conducive to hitting shots. Garnet Valley, the No. 9 seed, was trailing by four points to 24thseeded Downingtown West late in regulation. The Jags needed their shooters — Austin Laughlin, Cole Palis, Connor O’Brien, whomever. Brennan, a junior power forward, isn’t a player known for his ability to hit the 3-ball.

“It was tough,” Brennan said. “We had to get a couple of 3s, so obviously, we had to have our shooters out there.”

What transpired was a se-

quence that put the nail in the Jags’ season. The Whippets hauled in four offensive rebounds during a possession that lasted nearly three minutes. In the process they knocked down several free throws — 9 of 13 in the quarter — to come away with a 49-40 victory over the Jags. D-West (1211) travels to No. 8 Upper Darby for a second-round contest Tuesday.

Brennan eventually checked back into the game. But it was too little, too late for Garnet Valley (16-8).

The Whippets’ two big guys, forwards Greg Barton and Will Howard, accounted for the four offensive rebounds in the waning minutes. Maybe, if Brennan is in the game, the Jags get the ball back with enough time to rally.

“We had a great season and the seniors had a really good year,” Brennan said. “I’m proud of them. It’s a tough way to lose, but we’ll be all right and come back next year.”

Brennan paced the Jaguars with 12 points, eight rebounds and two steals. Laughlin, the team’s 1,000-point scorer and senior guard, dropped in 11 points to go with four assists and two steals. But Laughlin and the Jags had trouble finding a rhythm on the offensive end and shot 3-for-18 from beyond the arc.

Howard pulled down a game-high 10 rebounds and Howard had five of his six in the fourth quarter. The Whippets held the advantage on the glass, 30-21.

“Coach (Stu) Ross always tells us to hustle, hustle, hustle for the boards,” Barton said. “That’s what me and Will Howard, my other big man who works real hard. Coach told us to keep crashing until the end of the game, and that’s what we did.”

Naseem Roberson was a big factor, too. The junior combo guard ran the point with smarts, and scored five points in the fourth quarter. He had eight points in the opening quarter and made the Jaguars pay from long distance.

“Coach Ross is a terrific coach and he always teaches us in practice how to have poise, how to be under control and how to play the basketball game the right way,” said Roberson, who finished with a game-high 16 points on 4 of 7 shooting from the floor. He also led all players in assists (five) and steals (three). “We play hard together. We defend, rebound, do all the little things and that’s how we got the win today.”

Garnet Valley held a four-point advantage in the first quarter, but Downingtown West went on a 13-1 run to take an 18-12 advantage in the second quarter. Brennan ended a four-minute scoring drought by the Jags with two field goals. Connor O’Brien hit a runner in the final minute of the first half to tie the game at 23-all.

The Whippets twice led by six points in the third quarter, and that was the difference going into the final stanza. The Jags got oh-so-close, trimming their deficit to 38-37 on a Laughlin trey, but could never tie or go ahead. A pair of free throws by Cam McCole, followed by a Barton alleyoop, made it a 42-37 lead for the Whippets. Laughlin hit a freebie to get the Jags within four with less than five minutes to go. Alas, the Jags wouldn’t score again until the last second, on a Greg Vlassopoulos putback.

As the 24th seed, the Whippets are not expected to go far in the postseason. They are enjoying the ride, though, and embrace the underdog label. They proved Friday night, they will not be easy.

“We’ve had a rough season, overall, and we’ve played some tough teams. We’ve had one of the hardest schedules in the district,” Barton said. “This was a tough win and I’m glad we came out on top. (Garnet Valley is) a tough team, they can really shoot the ball. I thought we played very disciplined and held on our own. Their top player (Laughlin), he scored 1,000 points. We held him accountable and played good defense against him.”