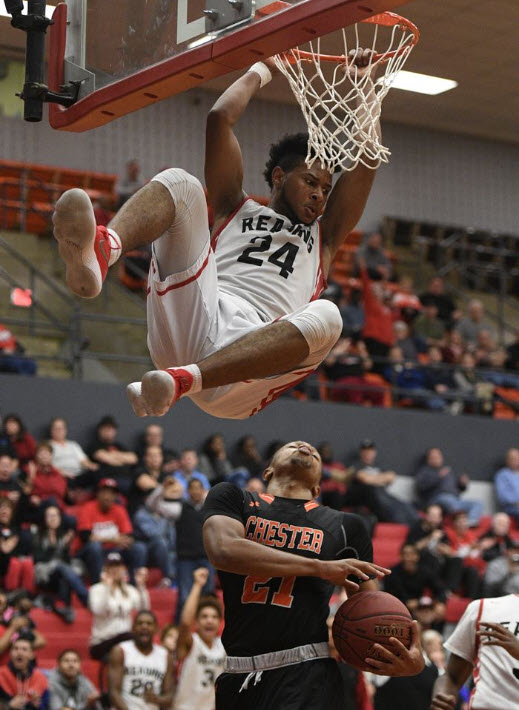 Ricki Lopez didn’t have to be told twice.He had an off night at Coatesville last week, heard about it and responded.

Reading High’s senior center came back with a big game Friday against La Salle College and was even more instrumental Tuesday, grabbing a game-high 14 rebounds as the Red Knights sprinted past visiting Chester 65-48 in their home opener.

“My mindset was be strong, be more active, box out, get on the boards,” Lopez said. “Like my coach (assistant J.T. Randall) said: ‘Touch bodies.’ That’s the big thing.”

Lopez threw his sizable 6-4 frame around against the Clippers (1-2), on the glass and in the open court.

He had five offensive boards, a pair of assists and came up with a key steal that sparked a 10-0 first-half run.

Later he brought the crowd at the Geigle to its feet when he took a pass from R.J. Dixon in transition and finished with a dunk.

That’s something he couldn’t have done a year ago when he was still feeling the effects of a broken leg suffered just before his sophomore season. He wasn’t in the shape then that he is now.
Since then, he has gotten his body into shape and learned how to play the game and be an athlete, Red Knights coach Rick Perez said.”I’m excited for Ricki’s growth,” Perez said. “He really deserves this.”

Lopez was just part of another deep, balanced effort by the Red Knights (4-1) who are going nine deep right now and sharing the basketball as if they’ve done it their whole lives – which they have.

Wesley Butler, Xavier Starks, R.J. Dixon and the others have played together forever in Reading’s KTB youth program.

Dixon, coming off the bench for the first time this season, seemed re-energized, and finished with 13 points and five assists.

He came up with a couple of steals in the 10-0 run that pushed Reading’s lead to 33-16 late in the second quarter.

Daniel Colter had seven points and eight rebounds, helping the Knights win the battle on the boards 37-25. A year ago, in a loss at Chester, Reading was outrebounded 44-23.

Tuesday, the Red Knights had assists on 14 of their 25 baskets.

“These young men, they’re selfless,” Perez said. “They share in each other’s success. They don’t mind stepping off (the court) to give someone else a chance.

“When Ricki got that dunk, all the bigs were up and yelling.

They’re excited for each other. That’s huge when you find that.”
Lopez had just three rebounds and two points at Coatesville and found himself on the bench for stretches of the second half.

Perez cajoled him to do better; so did the coach’s wife, Kristin.

“We’re a family, and we all hold each other accountable,” Lopez said. “(Coach Perez) said, ‘Come on Ricki, I know what you can do; I know how hard you can go.’ That’s all it took.