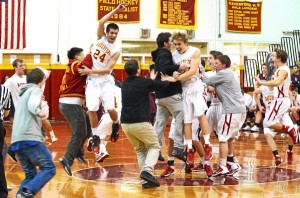 The streak is over.

Lower Merion (0-2, 0-1), the reigning PIAA Class AAAA champion, had won its last 44 meetings with Central League teams, a streak that covered parts of three seasons. The Aces’ last in-league defeat was a 64-49 decision Jan. 13, 2011, against Upper Darby. And it’s their first loss to Haverford since the 2006-07 season.

The difference for Haverford was at the free-throw line.