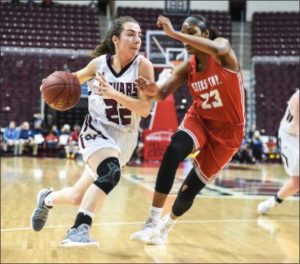 Brianne Borcky barely had the strength to speak the words.

“I don’t really have a voice,” she said.

The Garnet Valley senior fought through the pain to crack a smile and verbalize her feelings Friday night. The Jaguars’ record-setting season ended without a PIAA Class 6A championship.

“It stinks that it was this game, but I’m happy that we got this far,” said Borcky, who poured in a team-high 21 points in the 62-49 defeat to Peters Township. “I obviously would’ve wanted to win this, but I’m so happy we got this far. It was the best season we’ve had. Unfortunately, we just couldn’t win this last game.”

The District 1 champion Jaguars (30-2) set a program record for wins. They are the first team from Delaware County since Archbishop Carroll in 2009 to win that many games in a single season. Win No. 31 was not in the cards.

From the opening tip, the Jags had to battle. They trailed 11-2 out of the gate as unbeaten Peters Township (30-0) had its way running the floor and pressuring the Jags with a press defense.