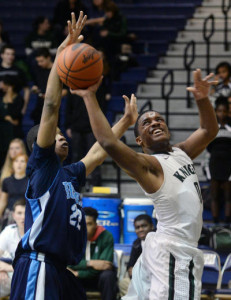 It’s with a resigned smile that Danny Browne admits the source of his team’s confidence Friday night.

Down by as many as 13 points in the first half of its PIAA Class A opener, Browne’s Delco Christian team never felt on the verge of losing control, driving down a road they’d been on before.

“Unfortunately, that seems to happen to us a lot,’ Browne said. “So we’re kind of used to it. It’s just the way things go down.’

That quiet confidence was justified when Delco Christian used its District One Championship-worthy poise to pull away late, clinching a 59-53 win over District 12’s third seed Paul Robeson at Council Rock South.

Browne was the ringleader, scoring 19 of his game-high 22 points after the break on 8-for-9 shooting, helping Delco Christian close the game on an 18-5 run and outscore the Huskies, 22-11, in the fourth quarter to earn its first PIAA Tournament victory since 2006.

The Knights (15-13) got it done by grinding out possessions, being smart yet aggressive on offense and shutting off everything that was working for Robeson (9-15) in the first half. Underpinning all those Xs-and-Os adjustments was the belief that things would turn in the Knights’ favor if they executed the aspects of their game as they have all season.