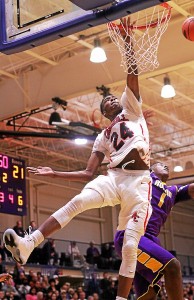 Archbishop Carroll’s Derrick Jones skies toward the hoop in the second half at Cabrini College Sunday. Despite 17 points and 16 rebounds, Jones’ Patriots fell to Roman Catholic, 69-64, in Catholic League action. (Robert J Gurecki)

Paul Romanczuk knew that eventually the run from Roman Catholic would come. In a tie game after three quarters, the parity a product of Archbishop Carroll’s explosive third-quarter run to get back in touch, Roman was bound to muster some kind of reply.

Ultimately, it was Carroll’s response to that run — or lack thereof — that made the difference in Roman’s 69-64 win Sunday at Cabrini’s Nerney Field House.

Roman started the fourth quarter with a 14-2 spurt — 16-2, if you include the final basket of the third quarter. Archbishop Carroll’s response was nothing but hectic, harried basketball. With Roman turning up the heat with each basket, Carroll got increasingly rushed and discombobulated, which led to falling further behind and the vicious cycle repeating.

“I think once they went up seven, we got a little frantic,’ Carroll guard Ryan Daly said. “We should’ve just run the offense. I understand why our team did that, because once you see that fourth quarter and you’re down by more than a couple of points, you start to feel that you need to score quickly and maybe we should’ve held the ball a little more.’

It didn’t help the Patriots (8-4, 3-1 Catholic League) that Roman didn’t miss from the field in the fourth quarter. Like, at all.