With red eyes and tears streaming down her face, Ridley High junior Shannen Hinchey gave a big hug to her coach, Roe Falcone.

The 52-40 victory over Springfield for the Central League championship Tuesday night at Harriton was quite an emotional experience for the Green Raiders.

For years, the Green Raiders were no better than a middle-of-the-pack Central League team. They often were over-matched against the league’s elite.

After going 9-13 last season, the Green Raiders are champions. They have earned a first-round bye in the District 1 Class 6A tournament.

They proved again Tuesday that they are for real. 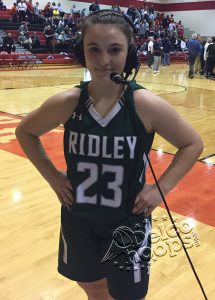 And that explains why Hinchey was so teary-eyed when she was looking for anyone – coaches, teammates, fans, family members – to embrace.

“It’s because we never got the respect that I feel we deserve and now we have finally shown that we are the best team in the Central League,” said Hinchey, who produced nine points, six rebounds and a pair of steals. “Everybody has contributed all year and we practice every day of the week — well, except for Sunday – and we go out and we work our butts off every single day.

“We finally got what we deserve.”