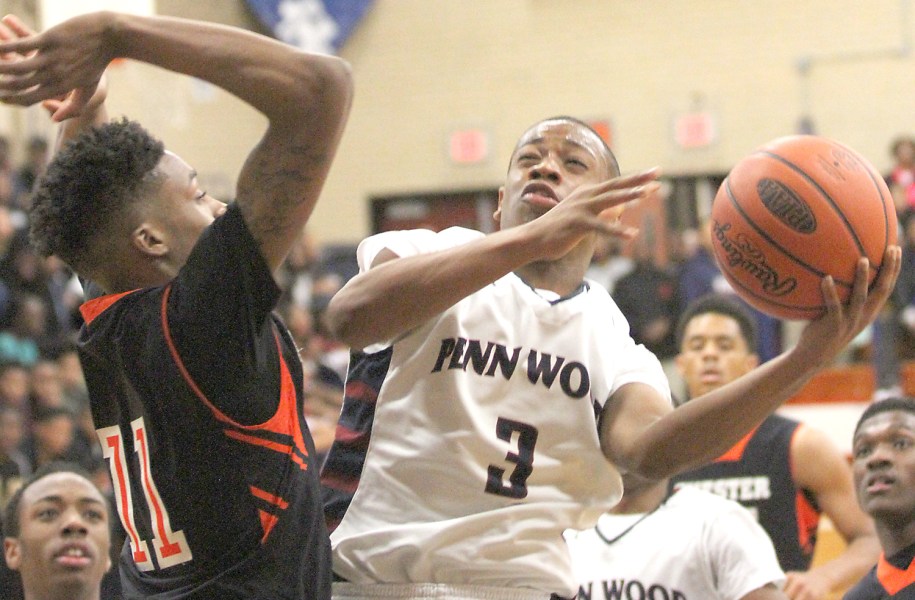 Penn Wood’s Kairi Jones, right, tries to get off a shot on a drive to the basket while being pressured by Chester’s Stanley Davis during a Del Val League showdown Thursday night. Davis and the Clippers pulled out a 54-47 victory. (ROBERT J. GURECKI – DAILY TIMES)

When the crowd gets rowdy towards the ends of games at Penn Wood High School’s gymnasium — fondly called the Shoe Box in some circles — the building takes on a claustrophobic feel. Patrons sit mere feet from the court on all sides. Their yells increase, the room grows deafening and opponents sweat out the final minutes.

Chester felt the phenomenon once again Thursday night as they squeaked out a 54-47 win over the rival Patriots. In the second quarter, the Clippers led by as many as 16. They held a 10-point advantage in the third. But Penn Wood refused to go away. With 1:58 on the clock, Jordan Johnson hit a turnaround bank shot to tie the game at 47 and the walls started to close in on the visitors.

“When you play your rival in your league, they’re not going to give up or quit by any means,” said Chester coach Larry Yarbray Sr. “Our guys got a little unfocused, got a little careless with the ball.”