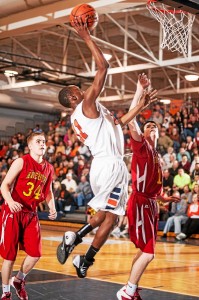 William Penn’s (11) shoots over the Haverford defense during a PIAA tournament game against Haverford at Dallastown Saturday, March 8, 2014. Jeff Lautenberger

As Chris Lyons walked out of the locker room toward the waiting and applauding Haverford cheering section, there were no tears, no regret and only a simple nugget of lament.

“It’s really tough,” the forward said. “I don’t want it to end. All the work we put in, I just want to keep playing.”

Lyons encapsulated the moment for his fellow Fords: While downcast after his team’s 67-49 loss at the hands of York’s William Penn, he and his teammates could only get so down about what they’d accomplished.

Two hours from home at Dallastown Area High School for the opener of the PIAA Class AAAA tournament, even being swarmed by the Bearcats couldn’t erase the simple fact that for the first time since 1970, the Fords had made it this far in a historic season for the long-struggling program.