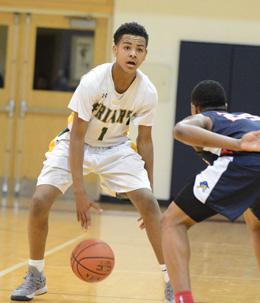 Tyreese Watson has moved into the starting lineup for Bonner-Prendergast this year. (Photo: Josh Verlin/CoBL)

This season, Bonner Prendergast sophomore Tyreese Watson made the jump from JV to varsity. Now, he’s not just getting minutes for the Catholic League contenders, he’s the Friars’ starting point guard.

The 6-foot-2 West Philly native was not intimidated by this major jump in responsibility. Instead he dove head first into a leadership role for Bonner, using his fun loving personality to connect with his teammates.

“Most of the kids are just semi-introverted…but Tyrese is more of a vocal leader,” Bonner coach Jack Concannon sad. “He’s not afraid to tell the older kids where they should be and what they should do, which is part of being a point guard, that’s what you want out of your point guard: leadership.”

Tyreese credits his leadership ability to the example set by his brother Maurice Watson Jr.