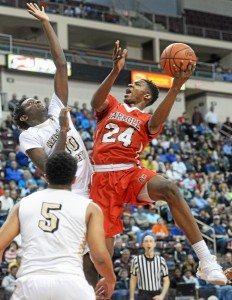 Derrick Jones ambled off the court at the Giant Center Friday night, towel on his head, a silver medal hanging limply from his hand. He stopped, like most high schoolers have to, to sign an autograph, then walked off into the waiting commiseration of his teammates.

His gait was strained, mostly from the pummeling he’d just taken in the fruitless quest for a PIAA Class AAA title. But weighing him down, too, was the substantial asterisk that Jones carries into his post-high school career.

Jones almost did it all for Archbishop Carroll Friday night. He scored 30 points. Grabbed 18 rebounds. Blocked five shots and deterred many more. Didn’t leave the court for 32 minutes and sent both of the Neumann-Goretti bigs who deigned to slow his freight-train production to the bench with five fouls long before the final whistle.

But befitting the illustrious, near-miss ethos of his career, he was left with a consolation medal, a 69-67 loss, and the toughest physical test of the night: Holding back the emotions of his final high school game.

In a career defined by its caveats, Jones’ final act offered yet another: For all his efforts from the field, all his dogged determination on the boards, the fact that a listless Carroll offense saddled up and rode him to within a whisker of the title, Jones went 4-for-15 from the line. And his team lost by two, meaning that Jones, one of the leading lights of the latest generation of Philadelphia stars whose legacies will far outlive their high school eligibility, to walk off the court without a title to his name in four seasons.