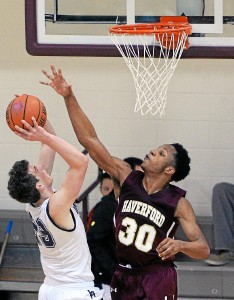 Coming into Saturday’s rivalry showdown with Episcopal Academy, Lamar Stevens knew plenty about what he’d get in the low post from Nick Alikakos. Stevens also knew what he hoped to show against his AAU teammate.

There’s no doubt as to which of the Team Final teammates was the older, more dominant presence Saturday.

Stevens set the tone in the paint, scoring a game-high 24 points and bulling his way to 17 rebounds as the Fords opened Inter-Ac League play with a convincing 57-46 win over EA in the Daniel Dougherty Tripleheader at Philadelphia University.

Stevens was simply not to be denied. He was 11-for-17 from the field, including a 5-for-5 performance in the second half that featured a couple of silky mid-range swishes. He had eight points and seven rebounds in the third quarter alone as the Fords (7-7, 1-0) formally stamped their authority on the game. And Stevens nearly outrebounded Episcopal (19) by his lonesome.

(click on this link for the full story and video)