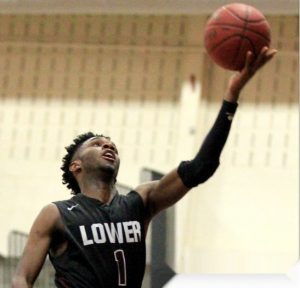 Steve Payne of Lower Merion goes through the Garnet Valley defense for a basket in a January game. Photo by CHARLES FOX / Staff Photographer

Steve Payne’s driving layup with five seconds remaining in overtime gave the Lower Merion boys’ basketball team an 88-86 triumph Saturday over Manheim Township in the PIAA Class 6A first round.

In other 6A action, Trevor Wall shot 8 of 14 from the field for 21 points as St. Joseph’s Prep topped Northampton, 62-57. Ed Croswell contributed a double-double with 12 points and 11 rebounds for the Hawks. Aidan Ellwood led all scorers with 28 points for Northampton but was held to just two points in the second half. St. Joseph’s Prep will take on Abington on Wednesday.

Ahmin Williams led a balanced Plymouth Whitemarsh attack with 15 points in a 71-47 victory over Dallastown. Ahmad Williams, Ish Horn, Alan Glover, and Danny Cooper all scored in double figures for the Colonials. Plymouth Whitemarsh will battle Roman Catholic on Wednesday.