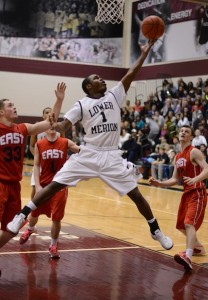 JaQuan Johnson ’14 scored 15 points and had seven assists in the Aces’ win over CB East.

It took the Aces a few minutes to get on the board Tuesday night, but once they did, the floodgates opened in a big way.

The same could not be said for Central Bucks East.

Behind a smothering defense, the Aces blanked the Patriots 17-0 in the first quarter and led 42-12 at halftime en route to a 77-43 romp in the opening round of the District 1 playoffs. Every player on the roster saw action; eleven entered the scoring column.