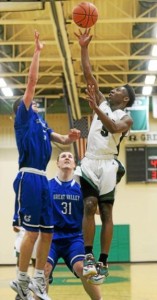 The recipe for Julian Wing Tuesday night was fairly simple: When Great Valley’s zone defense afforded him open looks from 3-point land, Wing didn’t give it a second thought.

Wing, who celebrated his 17th birthday in style, didn’t force the looks, but he took every bit of what the defense gave him, hitting all five of his 3-point looks en route to 21 points and a 57-40 Ridley win in the second round of the District One Class AAAA Tournament, booking the Green Raiders their first berth to states since 2013.

No. 9 seed Ridley (21-5) gets to sit on ice with a five-game winning streak in hand and await the winner of No. 17 Academy Park and No. 1 Conestoga for Friday’s quarterfinal. If it’s the top-seeded Pioneers, it would be the fourth meeting this season.

Ridley advanced courtesy of a fitting display of what it takes to be a PIAA-qualifying team. The Raiders attacked Great Valley’s zone every which way, hitting nine 3-pointers by five different players on just 13 attempts and using the threat of the deep ball to stretch the Great Valley zone’s soft spots elsewhere. When they could, they got out on the break with Brett Foster (19 points) to avoid getting sucked into the plodding pace at which the No. 25 seed Patriots prefer to play.

And when all else failed, they just hit their shots, including 14-for-17 from the line, highlighted by an 8-for-8 fourth quarter.