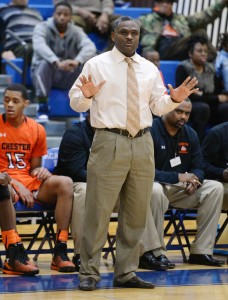 As Larry Yarbray stands in the corner of Academy Park’s gym, he can see the game that had just concluded playing out before his eyes once again.

Without prodding, the Chester coach points to areas on the floor – a missed free throw at this end, a loose ball the Knights corralled in that corner, a scrum his Clippers didn’t get the better of under that basket – that costs his Clippers a 51-48 loss on a buzzer-beater by Deandray Covert. He gestures off in the distance as if his directions could still provide instruction to his players.

But through it all Wednesday night, Yarbray explained what had transpired with a level of calm that belies the fact that three straight losses isn’t an occurrence that happens often at Chester.

Thursday’s loss to Academy Park was preceded by a 70-38 shellacking at the hands of Westtown at the Hoop Group Showcase at Parkland High School last Saturday and a 47-46 loss to Penn Wood the previous Thursday. The three-game skid (which has since ended thanks to a 71-49 win over Chichester Thursday) is the longest for the Clippers since 2009-10, Yarbray’s second season in charge.